All vampyres have tattoos that differentiate them from humans. Vampyres get their first tattoo after their Marking as a fledging, an unfilled blue crescent moon on their forehead. Since the tattoo is blue colored it gave rise to the term "Blue Vampyre" and later "Red Vampyre" for the red tattoo. If a fledgling survives into adulthood the tattoo is filled in and a new and unique tattoo forms around the crescent moon, a series of symbols or patterns that often reflect some aspect of the Vampyre's character.

These tattoos are remarked to be very beautiful. It is also the only way for humans to tell a vampyre apart from themselves, therefore it is not an uncommon practice for vampyres to cover up these tattoos with makeup to avoid any problems when socializing in the "human world". Zoey Redbird is the only vampyre to have tattoos that extend beyond her forehead, it goes down her arms, back and chest the more she battles evil forces, showing the tattoos' strong connection to Nyx.

In the first chapter, Zoey Redbird is Marked with the unique outline of a sapphire crescent. After her accident at her grandmother's lavender farm, her Mark is filled in, but with no surrounding tattoos. At the end of Marked, Zoey is shown to be an extremely gifted fledgling, as she receives tattoos on her face, neck, and shoulders.

At the end of Betrayed, Zoey has once more proven to be special to their goddess, Nyx, as her tattoos spread down her spinal cord and back.

At the end of Chosen, Zoey is gifted with another tattoo, this time around her waist.

On the very last page of Untamed, Zoey is gifted with new tattoos that show her she is still follow Nyx's path for her. She has tattoos on her palms now.

When Zoey banishes Kalona along with her friends, she feels that familiar burning sensation, as the Goddess gifts Zoey with new tattoos across her chest.

She loses all of her tattoos except the outline of her crescent moon when her soul is shattered in Tempted.

She regains her tattoos, but no new tattoos appear in Burned.

She gains no new tattoos in Awakened, although she does wonder when she will gain more.

She gains no new tattoos in Destined.

She gains no new tattoos in Hidden.

Find out, October 15th, 2013, when Revealed is released to the public!

Find out when the final installment of the House of Night Series comes to life! 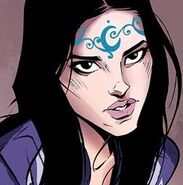 Add a photo to this gallery
Retrieved from "https://houseofnight.fandom.com/wiki/Vampyre_Tattoos?oldid=18566"
Community content is available under CC-BY-SA unless otherwise noted.