Hippolyte was a High Priestess and Queen of the Amazons.

In the first century B.C., she approached the Vampyre High Council with a petition signed by twenty-five vampyres and requested that the Amazons be allowed to withdraw from society and make their own coven, away from male influence. The Council granted her request and even aided them in establishing their settlement at Thermodon. The Amazons called her Queen instead of High Priestess.

When Herakles and his men arrived at Thermodon, they were graciously welcomed by the Amazons and she ordered a banquet feast for their guests. Herakles invited her to drink from him and they Imprinted with each other. For two months, Herakles never left her side and they galloped their horses through the treacherous mountain passes during the day and matched each other, arrow for arrow, on the archery range during the day. At night, they loved each other completely. Herakles gifted her with a heart crystal that was safely stored at the House of Night in Greece for centuries. When the two months ended, he revealed his king's agenda to send him to steal her golden breastplate to provoke a war between the Amazons and the Greeks. She smiled and returned to her chamber, returning with her golden breastplate and gave it to him saying, "You cannot steal a thing with which you have been gifted. There will be no war, as that would not be Nyx's will, nor would it be good for my women. So take this gift to your king, along with my deep affection for you, my brave, beautiful Greek warrior." Herakles replied that he would not return to Eurytheses and would by stay by her side forever.

Her reaction was shock and dismay. She insisted that he returned to his world and explained to him that she thought he understood the bond was temporary, that they could not be together in that lifetime as she and the other Amazons pledged to live a life away from men. She isolated herself for three days and nights, praying to Nyx, who came to her in a dream at the end of the third night. She came to the other Amazons and told him she believed the Greeks would never leave them in peace after her rejection of Herakles became public knowledge. She and the other Amazons left Thermodon and disappeared into the wilderness of Asia Minor. Before they left, she sent an Amazon rider to the Vampyre High Council, so that their story would be told before severing all contact with Vampyre society. Nyx gifted her with an affinity for Spirit. To ensure Herakles would never track her through the bond, she performed a Ritual to break the Imprint.

Hippolyte had raven black hair and wore a golden breastplate. She is described as beautiful, powerful and alluring. Her vampyre tattoo is an arrow facing the sapphire crescent on her forehead with two infinity symbols. 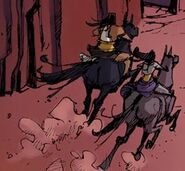 Add a photo to this gallery
Retrieved from "https://houseofnight.fandom.com/wiki/Hippolyte?oldid=17517"
Community content is available under CC-BY-SA unless otherwise noted.