Start a Wiki
Freya was the High Priestess of the Beregen House of Night.

In 1270, Freya went on a scouting mission to discover a new site for the Scandinavian House of Night. Her first stop was Beregen, Norway. She was entranced and instantly fell in love with the strong, majestic mountains that spread around the city like an amphitheater to the ocean sea. She also liked how it was close to the water and the best form of trade and travel was by waterways.

Instead of making an important decision impulsively, she retreated deep into the Norwegian forests. She secluded herself, so that she could only be surrounded by the wildness of the land, she centered herself and cast a sacred circle and then prayed earnestly to Nyx, asking the Goddess to send her a sign if Beregen was the correct site for the House of Night. Two enormous cats, Norwegian Forest Cats, padded out of the forest. It is not known what happened between the cats and Freya, but a graceful, slender High Priestess was later seen emerging from the forest, flanked on either side by a Norwegian Forest Cat.

Human history reports that Freya's open joy, tawny beauty, which so extraordinarily complemented the Forest Cats who had chosen her as their own, and her obvious connection to the land won the people. The humans were able to overcome their superstitious natures and embrace the House of Night. Local craftsmen helped build the House of Night on a spectacular mountainside overlooking the city. Freya and the Norwegian Forest Cats became so popular with the people that she had a special chariot built and could be seen riding through the narrow, winding streets being drawn by her beloved Kaia and Kaira.

The cats, Kaia and Kaira, lived an unheard-of half a century and died within the same hour as each other. The cats were so loved by everyone in the House of Night and Beregen that she even allowed non-Imprinted humans to attend a Major Ritual, the Spirit Release of a Familiar Ritual.

Freya has blond hair, and is described as slender and graceful. She also had tawny beauty. 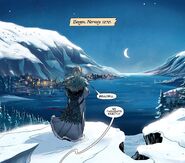 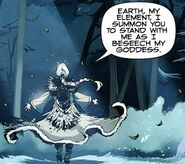 Add a photo to this gallery
Retrieved from "https://houseofnight.fandom.com/wiki/Freya?oldid=18081"
Community content is available under CC-BY-SA unless otherwise noted.